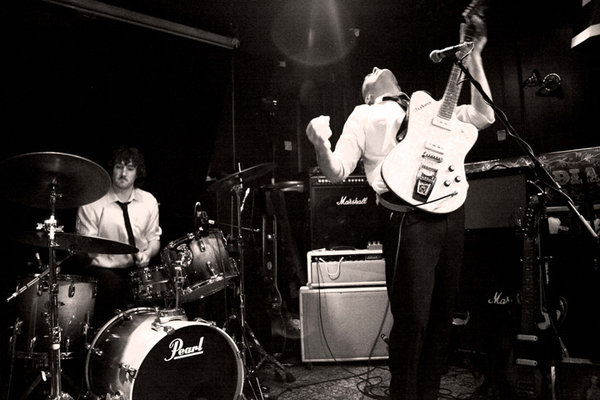 The Bonnevilles are shaking Northern Ireland in a way it hasn't felt since Van Morrison & Them obliterated Club Rado in 1964 and Stiff Little Fingers blew apart The Trident in 1977! The Bonnevilles don't so much play punk blues as use it as a springboard to create a completely new genre. And now they release their 4th studio album “Dirty Photographs” with LA based Alive Natural Sound Records. The Lurgan duo take Mississippi Hill Blues and Punk Rock and mix their own unique dark Northern Irish Punk Blues stew which drew the attention of the fore mentioned Alive Natural Sound which saw them release the award nominated “Arrow Pierce My Heart” on the label in 2016. The Bonnevilles formed in 2009 and quickly released their debut, and now, legendary album “Good Suits & Fightin’ Boots” on Motor Sounds Records. McGibbon being a blues fan was moved to create The Bonnevilles after a brief time in another duo and being heavily inspired by RL Burnsides “ A Ass Pocket Of Whiskey” and bands like The Soledad Brothers, The Immortal Lee County Killers along with blues heavyweights like Howlin’ Wolf, Robert Johnson, Chess Records etc combined with McMullans heavy metal drumming style the band has become Europe's top alternative blues act. 2018 saw the band team up again with LA based label Alive Naturalsound to release their 4th studio album “Dirty Photographs”. Their best recorded work so far they toured heavily in support of the release starting in April with a monster 3 week and 9000km European tour which saw them play in Eastern Europe for the first time. The Bonnevilles first album “Good Suit & Fightin’ Boots” released on Motor Sounds Records in 2009 was reissued on vinyl for the first time by Norwegian based Blues For The Red Sun Records and in November the boys did a full Finland and Norway tour in January 2019 to support this release. This was then followed by a full UK tour in May, Croatia in June and Norway December 2019. Due to the pandemic they had to put tours on hold for 18 months and they will be continuing to support the release of their new album Dirty Photographs and their reissues of Good Suits and their first ever EP Hardtale Lurgan Blues on vinyl for the first time throughout 2021 and 2022.