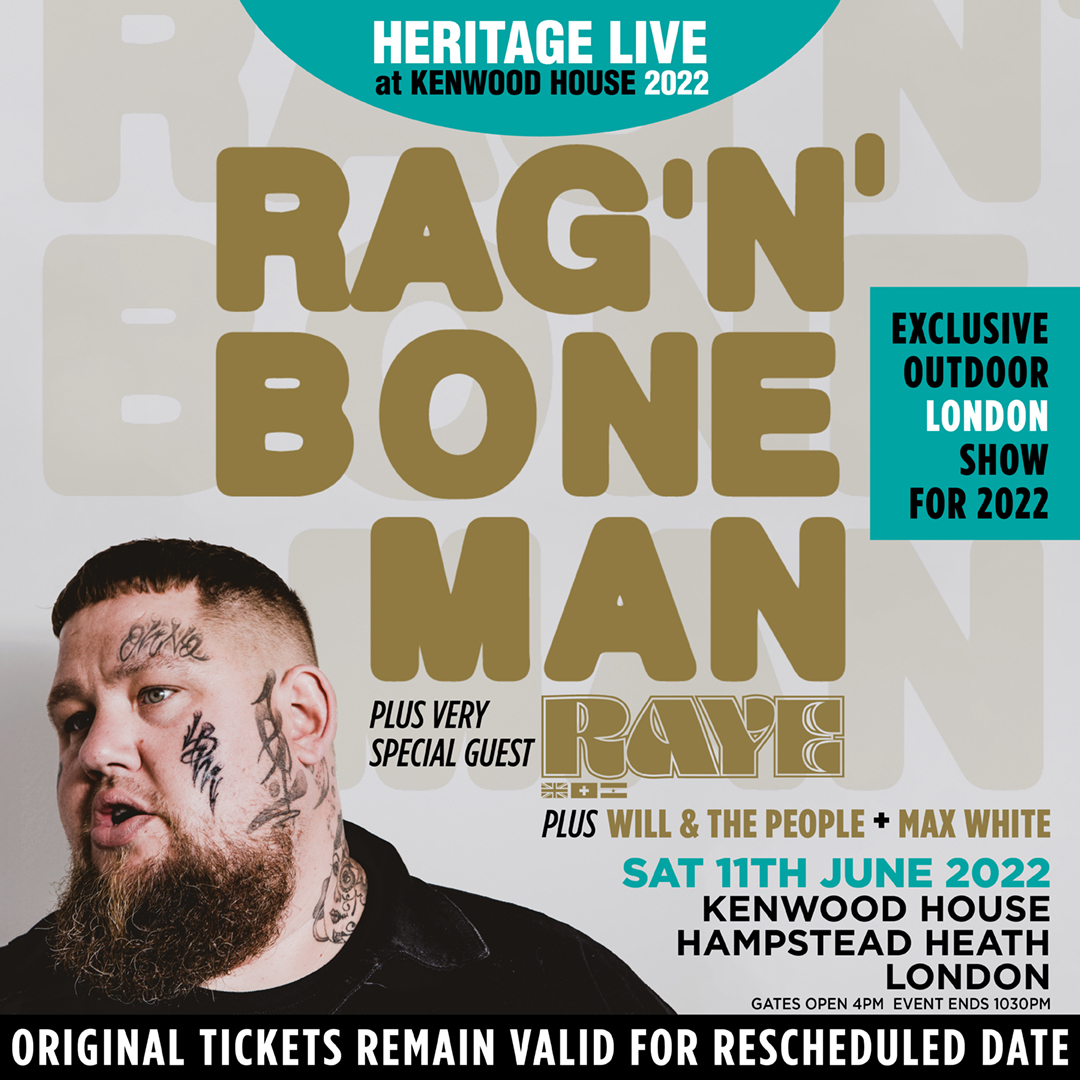 This show is for over 15's only. ID may be required at the door.

Please note: There is no parking at Kenwood House, please use public transport.

RAG 'N' BONE MAN will be performing an exclusive outdoor concert in the grounds of Kenwood House on London's Hampstead Heath on Thursday, 19th August 2021. Joining him for this unique evening will be very special guests RAYE and WILL & THE PEOPLE.

Having won the 2017 BRIT’s ‘British Breakthrough Act’ and receiving the BRIT’s Critics’ Choice Award in the same year, Rag‘n’Bone Man cemented his success following the record-breaking release of his triple-platinum No.1 album Human, with a further BRIT Award for ‘Best Single of the Year’ with the title track (Human) in 2018.

The album and its tracks have also been recognised internationally, earning him sell-out tours and festival appearances around the globe. More recently, Rag‘n’Bone Man appeared at last year’s BRIT Awards with Calvin Harris, performing their monster hit track ‘Giant’.

Raye made her breakthrough in 2016 after featuring on two of the biggest songs of that year, ‘By Your Side’ by Jonas Blue and ‘You Don’t Know Me’ by Jax Jones, RAYE achieved huge acclaim featuring on the BBC Sound of 2017 list.

Last year, RAYE released her debut mini album ‘Euphoric Sad Songs’ which featured the tracks ‘Love of Your Life’, ‘Love Me Again’, and the song ‘Regardless’ in collaboration with Rudimental. More recently, RAYE had a Top 10 single with Joel Corry and David Guetta with the track ‘Bed’.

Signed to Various Artists Management (The Libertines, Supergrass, Tom Grennan), and Distiller Records, Brighton-based band WILL & THE PEOPLE have released three albums, including their debut self-titled album which was a chart hit in Holland. After a two-month tour of the UK, Europe, and Australia, the band revved back into the world with a renewed vigour with a string of genre-bending alternative rock anthems released throughout 2020.